Archery is a sport, involving shooting arrows from a bow.  Easy eh? No!
Just shooting arrows is, relatively easy, it’s hitting the target repeatedly and accurately that makes it difficult.

There are four main types of archery:

Target archery: is the type of archery practiced at the Olympics, and is the version most beginners learn first. Archers shoot a set number of arrows at targets set at specified distances on a flat surface. It can take place either indoors or outdoors.  Target archery is the type carried out at Archers of Bridlington and Burton Agnes.

Field archery:  is set up over woodland and rough terrain. Archers shoot a specified number of arrows at different targets in sequence. Archers might have to shoot uphill or downhill, and the targets could be different sizes and at different distances so anyone taking part has to really think about what they are doing. Field archery is a great way of keeping fit and enjoying the outdoors. In the UK field archery is regulated by the National Field Archery Society as well as Archery GB.

Clout shooting:  this ancient form of archery was used as military training in the middle ages. The target is the clout, which is a small flag on a vertical stick, stuck in the ground and placed up to a maximum of 180 yards away.  An archer’s score is determined by how close each arrow lands to the flag.

Flight archery:  this form of archery simply consists of shooting an arrow over the longest possible distance. There is no target but it does require a very large, flat area, something the size of an aerodrome. Recurve, compound and longbow classes can all shoot flight archery within different weight categories. Specialist bows and lightweight arrows are used to maximise power and reduce drag.

Many types of bow are available, of these only three can be used at Burton Agnes, they are:

A brief technical discussion of these bows follows. On the beginner’s course, the recurve bow is used for training.  There is also a chance to try the longbow and take a look at a compound bow.

Bows have been used in Europe for over ten thousand years. Evidence suggests that the first use, in Asia was much earlier than this.  The earliest bow found in the UK was dated around 2700 B.C.

Archery became more prevalent in England around the time of the Norman invasion,  but the introduction of firearms led to a decline in the bow as a weapon, where it went on to be used for recreational purposes.

Based on the typical English/Welsh wooden bow, which the Victorians modified, we have the Longbow that we see today.  The woods that are now available are more diverse and you now regularly see snake wood, bamboo etc. on Longbows.  Bows similar to war bows are still shot (usually by members of The War Bow Society) but not at ABBA.

Developed in the United States, being first patented in 1969 for hunting. It uses a levering system, usually cables & pulleys to bend the limbs. It also uses a mechanical release aid (not fingers), giving a more consistent release of the arrow.

Scoring depends on the type of rounds being shot.  There are two basic types of round, Imperial and metric.

The maximum available score for a round depends upon the number of arrows required to complete the round.

There are many different rounds you can shoot.  The numbers of arrows and the distances to be shot vary according to the round you are shooting.

Calling the shots in the East Riding 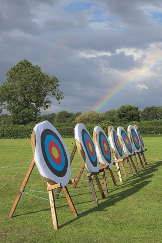 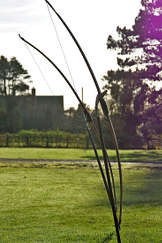